Are You Stressed? Discover The Power of The Acupressure Mat.

The Acupressure Mat Is A Highly Effective Tool for Stress Management

We all deal with stress and tension in our lives at some time or other, but when it literally becomes a pain in the neck, we are obligated to deal with it in one way or another.

The earlier the stress is dealt with, the easier it is to alleviate the tight muscles, and neck and back pain.

There are numerous ways  to deal with the symptoms of stress including massage, exercising, acupuncture, acupressure, meditation, etc.

I work out 4 to 5 times a week and do a variety of exercises including jogging, biking, yoga, strength training, and swimming and I still experience tight muscles and neck pain.  What I have found helps me the most is deep tissue massage and the use of an acupressure mat.  I love my acupressure mat and used it almost every day now with amazing results.

When I was first introduced to acupressure mats, I though my friend was crazy when he told me that lying on the acupressure mat for 15 to 20 minutes would melt away my stress and help me sleep – I was going through a lot at the time and had a hard time sleeping.  Anyways I tried the acupressure mat, and was completely hooked after the first use. I slept like a baby that night and it was great to have the acupressure mat pull my attention away from the swirls of thoughts that kept looping in my mind, to my body, and resulted in a “forced” meditation.

Acupressure has been used in Asia for over 4000 years as a tool for wellness and healing.  Acupressure mats have been used in Asia as well in different forms and in India in the form of the Bed of Nails.  A modern version of the acupressure mat was developed in the former USSR ( now Russia)  in the late 1970’s and became hugely popular and highly successful because it was very effective and affordable.  Acupressure mats were them introduced in Sweden in 2008 where they also became highly successful growing so fast that in less than 3 years more then 1 in 10 Swedes owned an acupressure mat and it was rated the Christmas gift of the Year in Sweden in 2009.

Use Acupressure to kill stress!

Acupressure mats work by helping to relax muscles, increasing blood flow, and blood circulation, and releasing blockages in energy flow.  It has also been shown to reduce blood pressure, improve sleep, and help overcome fatigue.  Acupressure gets your body’s own “feel-good” and pain relieving chemicals flowing and increases serotonin and dopamine – the brains neurotransmitters that help relieve depression and anxiety.

According to Dr. Zilberter, studies performed in the USA shows that the use of acupressure mats can reduce cortisol – the stress hormone- and release endorphins and oxytocin, both which tackle pain and stress, and result in the relief of chronic neck and back pain, muscle tension, and migraines.

Dr. Zilberger’s study  resulted in  98% of the study’s subjects reporting pain relief, 96% reported relaxation, 94% improvement in the quality of sleep, and 81% reported an increase in energy level.  Approximately half of the subjects with allergy problems reported their symptoms’ relief.  Among those who tested the method while having no particular problems,  more than half nevertheless reported one or more positive effects of the Applicator [acupressure mat]”

You don’t have to suffer from health problems to  take advantage of the benefits of acupressure mats.  By lying on the Heavenly acupressure mat for 15 to 40 minutes, you are taking that time out for you!  You deserve to have you time, and that alone has amazing benefits.

I still love professional massages and get them once in a while, but the convenience of having a “session” whenever and wherever I want is just fantastic, and the affordability (one time cost of about $40 bucks) of the acupressure mats can’t be beat! 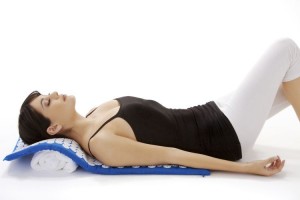