Good sleep is a very important part of our overall health and well being, yet so many people suffer from sleepless nights and insomnia because of stress, anxiety, aches & pains.   Many resort to medication and drugs in order to get a few hours of deep restful  sleep but there are undesirable side effects to these drugs and pharmaceuticals.

There is now a 100% natural solution that has helped a lot of people with amazing results – acupressure mats.  acupressure mats are a thin mat with thousands of spikes on it that one lies down on.   They usually measure about 29 x x17 x 1 inch and have over 8,000 plastic spikes.

Actress Claire King, the star of Bad Girls and Emmerdale, is well known for playing the roles of strong women, but after being diagnosed with non-cancerous fibroids that became so painful that she had to quit acting and have a hysterectomy while also going through a divorce, she suffered from terrible anxiety and insomnia.

Claire says:  “It was hard to get my head around it…  With the divorce too, everything built up.  So I’d wake up two or three times in the night worrying – and things are always much worse in the middle of hte night.  Being mentally tired from all the worry was really difficult.  In the morning I’d be feeling exhausted and thinking, ‘IS it ever going to end?'”

After trying prescription drugs that left her feeling groggy, acupressure mats were recommended to her.  ” As it is a natural alternative, I thought I’d rather try it as i was getting so tired.  It’s quite literally the best thing I’ve found!” says Claire.

So if you suffer from insomnia, stress, anxiety, muscle tension, back or neck pain, the Heavenly Acupressure Mat could be for you.  Try it risk-free at www.heavenlymats.com 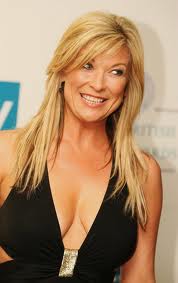 What Other have to say about the Heavenly acupressure mats:

“I really love my Heavenly Acupressure Mat. I was skeptical when I first purchased it that it …   Surprisingly, the mat seems to work quite well. I lay on this 20 minutes before bed every night and it seems to both loosen up my back and put me to sleep. As someone with chronic lower back pain, this is extremely helpful.    It has helped me to sleep better than I have in a long time, and my dog surprisingly likes to lay on it, too.”  – Christopher S

“I am an insomniac.  I now fall asleep while on the mat.  I roll up a towel and put the towel under my neck with part of the mat over the towel and the rest of the mat under my shoulders. This causes enough relaxation for me to fall asleep and …  I stay asleep through the night,  If you have problems sleeping, give this mat a try. I now know how it feels to be well rested.”  – Chip